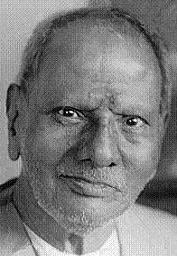 Nisargadatta Maharaj, like Ramana Maharshi, is often described as a simple, humble and enlightened man. A giant among spiritual teachers, he was an uneducated shopkeeper when a friend introduced him to his guru. Simply by following his guru’s advice, Nisargadatta discovered his true nature as described here:

My guru, before he died, told me: Believe me, you are the Supreme Reality. Don’t doubt my words, don’t disbelieve me. I am telling you the truth — act on it. I could not forget his words and by not forgetting — I have realized.

Nisargadatta Maharaj died on September 8, 1981. No ashram formed around him, and he appointed no successor, so his teaching is preserved in a series of dialogues collected into books. His style is straightforward with emphasis on the earnestness of the disciple.  Here are a few Nisargadatta Maharaj quotes:

Q: Experience is subjective, it cannot be shared. Your experience leaves me where I am.
M: Truth can be experienced, but it is not mere experience. I know it and I can convey it, but only if you are open to it. To be open means to want nothing else.
Q: I am full of desires and fears. Does it mean that I am not eligible for truth?
M: Truth is not a reward for good behaviour, nor a prize for passing some tests. It cannot be brought about. It is the primary, the unborn, the ancient source of all that is. You are eligible because your are. You need not merit truth. It is your own. Just stop running away by running after. Stand still, be quiet.

I Am That is a good introductory collection of Maharaj’s dialogues from the early 1970s. The stern, bare-bones talks of the last year of his life are collected in Consciousness and the Absolute. These talks represent Maharaj fighting dwindling vitality and forgoing philosophic explanations, in order to directly speak his truth to any with the ears to hear:

M: How did you get this “I Amness”? Did it come spontaneously, or did you try for it? As the Absolute, you were free from all concepts, including the primary concept “I Am”; suddenly you were caught up in the “I Amness”. Who did it? Has it not happened spontaneously?
Q: Yes, that is true.
M: You did not have this concept “I Am” in the course of the nine months in the womb. Understand this state of affairs; the concept “I Am” comes spontaneously and goes spontaneously. Amazingly, when it appears, it is accepted as real. All subsequent misconceptions arise from that feeling of reality in the “I Amness”. Try to stabilize in that primary concept “I Am”, in order to lose that and with it all other concepts. Why am I totally free? Because I have understood the unreality of that “I Am”.

The most comprehensive site about Sri Nisargadatta Maharaj is:
sri-nisargadatta-maharaj.blogspot.com/ – Books, videos, quotes, photos and more.

An interesting interview with Alexander Smit that gives insight in Maharaj’s methods.

David Godman provides a fascinating glimpse of his visits with this sage.

Here is the story of a 2005 visit to Sri Nisargadatta’s former residence.

Also, here is an interview with Ramesh Balsekar, who claimed to be a successor to Sri Nisargadatta Maharaj. Ramesh passed away in September of 2009.

Be warned, however, there was scandal regarding Balsekar profiting financially and sexually from his teaching. Read about it here: Real Advaita, Pseudo-Advaita, And Ramesh Balsekar.