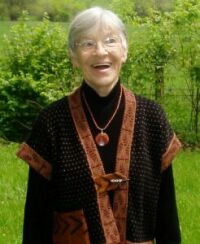 Bernadette Roberts passed away in her sleep on November 27, 2017.  What follows is a review written before her passing.

Bernadette Roberts’ path is that of a Christian and if you have any affinity with Christian mysticism you must read her books. Her primary concern is with addressing the passage from what she calls the unitive stage to the no-self stage. While the unitive stage (or stage of being one with God) is well known in Christian literature, that there is a path beyond this stage is virtually unknown. Bernadette Roberts writes from her experience of living in the unitive stage until the self and its experience of being one with God disappeared into a new way of knowing. As she says:

Bernadette Roberts writes for Christian contemplatives, so it may be difficult reading for those outside that world. Her language is that of Christian mysticism: Christ’s Mystical Body, the Trinitarian nature of God, the meaning of the Eucharist, and so on. While her first book The Experience of No-Self had a wider appeal, her subsequent books, The Path to No-Self, What is Self?, and The Real Christ, have an increasingly narrower audience. I think some of the reason is Bernadette’s amazing inability to relate to other traditions. She insists that the no-self event is not a part of the world’s mystical literature and that her’s is the first attempt to describe what is beyond the unitive stage. She points out the errors in the language of other traditions, then excuses her own language as insufficient for describing the no-self stage. It never seems to occur to her that other authors are also struggling to describe the indescribable: to explain the Absolute in relative terms. She freely admits, though, “The Christian path is the only one I ever lived,” and her understanding of it is profound.

Bernadette Roberts’ writing and her life are about finding the true nature of man. Bernadette tells us what she found and it should gladden our hearts that someone sought and found their true nature. Her’s may or may not be the first written account of the no-self stage, but it is certainly one of the most detailed.

A 1986 interview of Bernadette Roberts is available here.

6 thoughts on “Bernadette Roberts: A Christian Mystic for Our Time”