I envision the spiritual landscape as an ecosystem in which teachers occupy varying niches. When one passes away, another moves in to fill the niche. 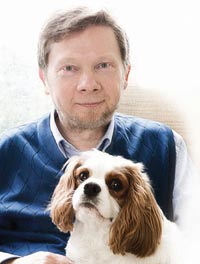 Eckhart Tolle fills the niche left by Jiddu Krishnamurti: that of world-traveling teacher spreading the message of a new way of living to as many people as possible. Like Krishnamurti, I think Eckhart Tolle will be with us for many years.

A look through Eckharttolle.com reveals lots of things for sale: the $19.95 a month Eckhart Tolle Now membership community, audio downloads, a vast array of cd and dvd boxed sets, and his books — The Power of Now, Stillness Speaks, A New Earth, and Milton’s Secret (a children’s book which I have not read). The Eckhart Tolle Foundation invites you to donate, but doesn’t list a single completed project, and no information on the foundation’s finances.  The site does have a few YouTube excerpts for free, and a small selection of articles.

Eckhart Tolle’s events come in cycles.  Some years there are none.  For 2021, a Hawaiian four and a half day retreat costs $1,497 for tuition (USD). Rooms at the resort are $397/night.  Clearly only for the most dedicated spiritual seekers….

Yet few question Eckhart on the apparent money focus. Instead, they excuse it by pointing to his penniless past and how he never set out to make money. His big paychecks are simply payoff for his good work. How much money does one person need? Certainly he could retire comfortably from the profits off of the best-selling The Power of Now.

So here I am, harping on money-making, again, while I charge for my books and films and advertise them on this site.  I still maintain that anyone who has completely seen through the illusion of the world and mind and lives from that space would have little interest in profiting from helping his fellow-man. Yet my feeling, when I read his material, is that Tolle has seen through the illusion. I can’t explain my conflicting reaction.  Perhaps Eckhart Tolle thinks his $1497 retreat is a bargain.

My advice is to avoid the organization: don’t become a Tolle worshipper…. Instead, read The Power of Now, Stillness Speaks, and A New Earth, then practice his suggestions with all your heart. They may not take you all the way, but will carry you a long way down the interior road toward our True Self.

Here are some key quotes from A New Earth:

Eckhart Tolle is wildly popular, though I’m baffled by that as his message is generally quite confrontational. At the beginning of A New Earth he states, “The ‘normal’ state of mind of most human beings contains a strong element of what we might call dysfunction or even madness.” In one of his recorded lectures, he tells the audience that their life is nothing more than the space between two dates on a tombstone… and the audience laughs. It seems everyone thinks Tolle is talking about the clueless fool in the seat next to them. Perhaps Tolle’s demure personality causes some of this reaction. In a way, it’s hard to take him seriously — he’s so soft-spoken, so relaxed. If he held a gun to your head, you couldn’t imagine him pulling the trigger.

A final note: when the day comes to move deeper than Eckhart Tolle’s current teaching, look especially to Nisargadatta’s Consciousness and the Absolute. There you will find the next step.

I leave you with an excerpt from The Awakening West where Eckhart Tolle describes the moment of his realization:

…for many years I lived in a state of great fear and continuous fluctuation between states of depression and high anxiety. This was to the point of becoming almost unbearable. One night I woke up in the middle of the night, as I had many times before, in a state of even more intense dread and fear. The mind had lots of reasons why I was feeling fearful, and yet that state was continuous no matter what my external situation was. It became so unbearable that suddenly the thought occurred to me, “I cannot live with myself any longer.” That thought was the trigger for a transformation. The thought kept repeating itself many times in my head and then suddenly there was a stepping back from the thought and a looking at the thought. I asked, “Who is the ‘I’ and who is the self that I cannot live with?”

In Zen they have koans and it’s almost as if a koan spontaneously appeared in my mind. A koan’s purpose is to destroy conceptual thinking because it has no answer on a conceptual level. So, I asked, “Who is the self that I cannot live with? Are there one or two? If I cannot live with my self, who is that self?” And then, beyond thought, there was a recognition of the “unhappy me,” as I later called it, as being something completely non-substantial and fictional. Then consciousness withdrew completely from identification with that “unhappy me.” At that moment the whole structure of the “unhappy me” and its pain collapsed because the withdrawal of identification was so complete. What was left was simply beingness or presence. There was still a moment of fear. It felt like being drawn into a hole within myself, a vast whirlpool, and a realization arose in my chest, “Resist nothing.” That was the key. Then resistance was relinquished and I don’t know what happened after that.

A thoughtful Satsang Report from a Eckhart lecture courtesy of Sarlo’s site (scroll down the page for the Eckhart review).

To get a feel for the criticism of Eckhart Tolle, visit this Guruphiliac page or this humorous essay on Sarlo’s site. Also, here is a YouTube video where a reporter gives a half-hearted attempt to question Eckhart about his money-making activities: