Adyashanti presents a blend of Zen and advaita teachings that’s popular in the West Coast guru scene. Below you’ll find my initial impressions of Adyashanti, as well as updates from 2012 and 2019.  Years ago, a reader mailed me a DVD of his which I dutifully watched, then put on the shelf. 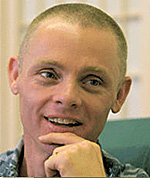 It wasn’t that I didn’t like what I saw — I wasn’t sure of my impression. On one hand, I saw a witty, soft-spoken American with an Indian-sounding name, smiling a lot, pausing for long silences, and talking about how we are already that which we seek. Yet I couldn’t dismiss him outright as I also felt an undercurrent of seriousness and honesty.

Many months later, I read two of his books: a collection of poetry and short quotes (My Secret is Silence), and Emptiness Dancing, a collection of transcribed talks. You can see a selection of his poems at the Poetry Chaikhana. Some poems were clever and humorous and some were calls to action. It’s not that he wasn’t speaking about the profound. For me, there wasn’t a feeling resonance with the imagery of the poems; none that haunted me with the feeling that truth was close.

Emptiness Dancing offers numerous noteworthy points that differentiate Adyashanti from most of the “be here now” advaita shuffling clones in the spiritual marketplace. Some of my favorite quotes:

What did I not like? He is not consistent in describing the goal. In one talk, he describes three levels of realization: the head, the heart, and the gut. Yet in other talks, he seems to be encouraging people toward lesser experiences. He tells people to “just be.” Encourages being aware of the five senses to “open to the whole.” Equates relaxing into the moment with one’s true nature. However, he says when the undivided state occurs, two things may happen: awakening to our true nature, or arising of our old conditioning. I must point out, though, that I was reading a collection of excerpts from talks, and that may explain the confusion.

Can we judge the teacher by those he encourages to teach on their own? Jon Bernie’s Teachings are unimpressive. He seems to propose a path of ever increasing ease — relaxing our way into enlightenment. We hear the siren call to stop, just be present, be here, be awareness, ta-da tadum. If I hear one more teacher talk about flowers opening…. Here’s a list of those Adyashanti has invited to teach.

Despite this, I initially awarded Adyashanti three stars — because I think if I sat down with him at the kitchen table as a struggling seeker, meeting him would help. There is helpful material in his books. I worry about his ever increasing organization and the lack of “quality control” of disciples.

2012 update: I attended a two-hour satsang with Adyashanti in May and offer the following notes from that session:

A flickering candle, a vase of flowers — pink and white, a clear glass of water and an empty chair; nearly 150 people waiting, many straight-backed, eyes closed in meditation, a few hushed exchanges; the auditorium haltingly grows quieter as we edge towards 4:00. At precisely 3:55, a soft-spoken bald guy dressed in the California satsang uniform (sandals, long pants, and a shirt with just a hint of Indian influence) stepped to the microphone. He laid out the rules for the afternoon. Besides the usual request to turn off cellphones, we were told the event would begin with 15 minutes of silence, to avoid wearing scented products at future meetings, and to remain seated until Adya leaves the hall.

At exactly 4:00, Adyashanti silently walked on stage, took the chair, and closed his eyes. Maybe it’s the lighting, but he looks a good ten years older than the photographs on his website. He also looks very fit; dressed in a coarse grey shirt with long brown pants, he appears to have just returned from a rousing hike in Marin. He’s the embodiment of Northern California…. There is much about this that doesn’t appeal to me. There is too much stage craft and formality and I keep multiplying the $10 I paid to get in times the 150 people in the room…. I turn from these thoughts to the feeling in the room. It’s quiet, with the underlying energy of a room full of people sitting quietly, but that’s all I feel. I don’t sense any extra-ordinary Adya vibe filling the space.

4:14 and Adyashanti begins to talk. For quite a while, he speaks about the appearance of difference between things. Differences cause suffering, though fundamentally all are aspects of life. I am unimpressed and actually start to get drowsy, then the talk dives deeper.

“The fundamental division is ‘me.’ The vast majority don’t want to look at that ‘me,'” he says. My mind perks up at this comment.
“Illusion lurks in the gray areas where we’re not being specific.”
“Spiritual inquiry is ‘what is this thing called me?'” I wonder how many in the audience are willing to ask the question he poses.
“Look directly into your own experience.”
“Oneness is the shocking realization that there’s nothing that’s not IT.”
“Believing in oneness is not the same as realization.” At this, I nearly jump out of my chair and shout “Amen, brother!”

At 5:33, he stops for questions. His answers display a remarkable ability to encourage people at whatever point they find themselves: speaking of serious matters in an uncompromising yet inviting manner. One woman describes how she came to the edge of a seeming cliff in meditation and turned away from it. She is now afraid to meditate. Adya replies that the cliff is waiting for her and she will eventually come to it. Just a step is all that is needed; not a swan dive or plunge, just a step. He is reassuring yet direct.

“There’s a great difference between transcendence of ego and death of ego.”
“What’s true in any given moment is what sets you free. Take it in rather than push it away. You completely stop; the whole internal battle stops.”

I was pleasantly surprised to find the talk ran over about ten minutes. Overall, a good two hours. He’s a star for sure (women literally let out hushed moans and whispered “gorgeous” as he spoke), and I don’t know what it would take (money, influence, persistence?) to sit down with him one-on-one or in a small group. I wonder if he ever comes down from the stage and mingles with the students….

2019 update: I attended a day-long intensive with Adyashanti at Spirit Rock Meditation Center called “The Dialectic of Enlightenment.”  With an hour for lunch and a 30-minute break, the program was only five-hours long, so not my definition of intense, but it was still a unique opportunity to spend more time in Adyashanti’s vibe.  Though I took a lot of notes, I’m not going to do a long write-up.  Suffice it to say I found the energy in the room bright, clear, and expansive, so there was a lot of opportunity to tune into the ground of being, as Adya calls it.  I was again impressed with his patience and his ability to reach the heart of peoples’ often unclear and rambling questions.  As he stated, he’s trying to find the “answers behind the questions” and provide inquiry on those assumptions.

After this event, I raised Adya from three-star to four-star status.  Despite the fact that he said at this event that he no longer works one-on-one with people, his honesty and inward-pointing are of value.  My only caution is to watch that you don’t get caught simply chasing his vibe from event to event.  Let his teachings inspire you to take daily action.

Here’s a short video of Adyashanti on YouTube illustrating his patience:

Adyashanti’s most recent book is The Most Important Thing: Discovering Truth at the Heart of Life.

27 thoughts on “Adyashanti – Honest but Use in Moderation”