I am fortunate to know Bob Cergol before and after his encounter with Reality. 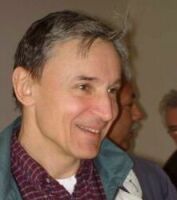 Bob began his spiritual search studying with Richard Rose. He plunged into the life of a spiritual seeker — reading, meditating, spending time on solitary retreats, working in study groups with others, eventually building a cabin on Rose’s farm in West Virginia. As the years passed, however, he began to doubt if he would ever find an answer to his spiritual desires.

Finally, he moved away and entered wholeheartedly into “regular” life. He soon married, moved to North Carolina, expanded his business, and became a father — in short, found all the markings of a successful life.

In hindsight, Bob sees this apparent giving up on the spiritual search as a important step in his search. Within the welter of the everyday world, Bob came to a more honest appraisal of the lot of “everyman”; the ego of himself as above the fray, as a spiritual seeker, began to fade. Progress came in unlikely circumstances. Looking back, he writes,

For me, I had to tell myself I was giving up [the spiritual search], in order to stop lying to myself about my doing it or following it. I decided to live my life as an ordinary person. In hindsight, that was when my inertia stopped and I actually started to change or make progress.

For me what ended up mattering, is that I still had the desire, but it wasn’t blocked by my pretense of doing something. I acknowledged that I wasn’t doing anything — and couldn’t, because of my newly chosen circumstances (i.e. marriage and family). In reality, I was still on my inner journey and was no longer blocked. It unfolded of itself — because I still WANTED IT to and didn’t resist it. I continued to look within but no longer with the thought that I should, no longer with the thought that I would achieve a result. I looked within because I was compelled to and it was easier once I stopped pretending that I was above the fray, and accepted that I was in fact no different than every other human being — maybe less honest, maybe more egotistical.

With a handful of others, Bob began participating in an online discussion group studying the correspondence between Richard Rose and Alfred Pulyan. Within this correspondence (now available in the book  Letters of Transmission: The Enlightenment Method of Zen Master Alfred Pulyan), Bob discovered these words by Pulyan, “The body dies and is dissipated. The mind is one with it at all times and is therefore also dissipated. Nothing of you remains. There is no survival or reincarnation or ‘immortal soul,’ [or] ‘conscious entity.'” Bob’s reaction,

…suffice it to say that it was not what I wanted to hear, certainly not what I expected or hoped to read from Pulyan. The thought kept rolling around in my head, “He’s right! But where does that leave me?”

That thought started a chain reaction of feeling and honesty that culminated in a revelation beyond the thinking/feeling body-mind of Bob Cergol.

An intensity of awareness built until at some instant the entire world — including ME — was OUT THERE — part of the view. Yet there was no dichotomy because this awareness also CONTAINED the whole view, the totality. In that instant I saw there was NO DEATH — because there was NOTHING TO DIE! In that instant I saw the equality of all beings, their essential unity — they were all manifestations from the same ground.

This revelation is what Bob Cergol lives with today and tries to communicate to others. He discovered the unreality of the man and unveiled something far vaster, deeper, and eternally present.

You’ll find a number of essays by Bob Cergol in the book Beyond Mind, Beyond Death.  Bob was also kind enough to write a foreword for my book Subtraction: The Simple Math of Enlightenment.  Lastly, check out my interview with Bob on the Journals of Spiritual Discovery podcast.