In the late 1950’s and early 1960’s, Pulyan endeavored to teach students through the mail. Teach is the wrong word, really. He tried to lead them to an awakening by confronting the student’s ego. He specifically said it was not a mechanical system and his letters only helped the person for whom they were written.

Alfred Pulyan claimed a 70% success ratio (so enlightened Pulyan pupils must be out there!), only worked with a handful of students at a time, and asked for nothing except a self-addressed, stamped envelope.

If you have any information on Alfred Pulyan, please email me at: sanevins2[at]yahoo.com. I leave you with two quotes to give you a feel for the man:

Yet for all other people, who are not such heroic figures [as Jesus or Buddha], a master or guru is necessary.
His function is to help the student to surrender, to the removal of ego- domination, “bossiness”…
Just as we need an outside point to rest a lever on if we are to move the earth, so we need a friend to help our ego-fight FROM AN EXTERIOR POINT OF VIEW FROM OURSELVES.
It is necessary that this “master” be “awakened” himself, because this is NOT a mechanical system and this mystery, this “God” is very much alive, conscious, & directs the process (& everything else) even though in the student it is still HIDDEN (Our little consciousness hides this big Consciousness like a penny hides the Sun).
Since the ego must be DETHRONED in the student it is a disagreeable, unsatisfying , hard, up-hill process all the way.

There is One Self, not many. You hold it away by your insistence (like most people) in holding to the hegemony of your “self.” When your hand finally releases its hold of the bedclothes your pretended “ownership” of your body (which you do not even “run”) & of your consciousness (as though it were a piece of real estate) ceases, but the Consciousness goes on.
However you can know the One Self-Consciousness as well as you know anyone — indeed far better. By “know” I mean really know, know by experience, know by acquaintance, know intimately — not any of the theological hot-air & clap-trap.

Several interesting essays and letters to the editor by Pulyan are in the long out of print magazine The Aberree. View these writings and other information about Alfred Pulyan at:
www.selfdiscoveryportal.com/Pulyan.htm

Here is a fellow who says he met Pulyan!
http://the-wanderling.com/pulyan.html

Thanks to a reader for alerting me to this, here are the parting words on Alfred Pulyan’s gravestone: “He who loves his life loses it, and he who hates his life in this world will keep it in eternity.” 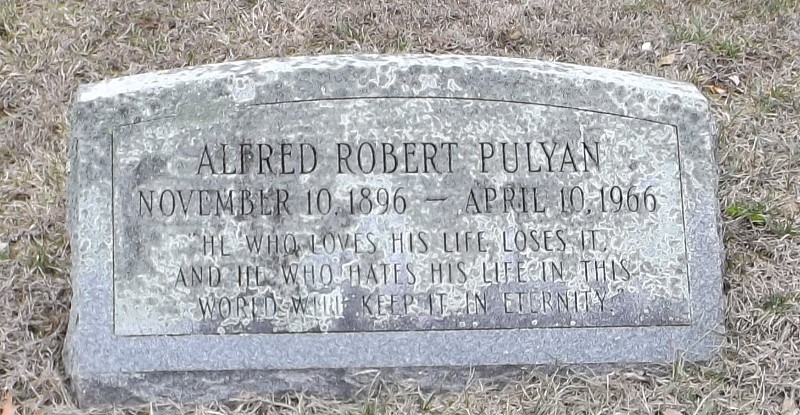