The life of Paul Rezendes is a compelling story: leader of two notorious 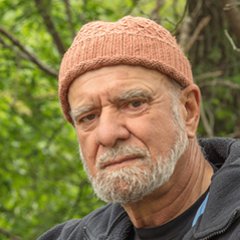 motorcycle gangs becomes yoga teacher,spiritually awakens, then lives that through his work as a renowned wildlife tracker, teacher, and photographer.  Paul points definitively to the conundrum of the self, the seeker, getting in the way of what is sought.  Call its resolution the non-experience of awakening:

What is always here is not an experience, but it makes itself known to thought. Thought, the brain, cannot know it or hold it, but it can’t deny it. It, that which is not coming and going, is being us, being all beings, and it informs thought of this. Thought has to learn how to move with This.

Paul Rezendes has both an intensity and transience about him – like an Aikido master of presence.  Watching Paul speak at a TAT Foundation event, there was a moment where the air appeared aglow around him; he was transfigured.  “His face shone like the sun.” Matthew 17:2  Don’t worry, I’m not getting Biblical on you, or comparing Paul Rezendes to Jesus.  He does shine when the spirit is upon him, however, and I understood what that Biblical author experienced.

Spiritual practice is about unbecoming.

Described as “a dramatic, deeply spiritual book,” Paul’s The Wild Within: Adventures in Nature and Animal Teachings is splendid read that also includes a few practical exercises in seeing through the self image that blocks the non-experience of awakening.  In it, Paul makes subtle observations of the cunning deception of the self.

The self that thought had created was incapable of awareness.  But by practicing phony awareness, I had been able to maintain the illusion of achieving awareness.  I saw that, ironically, my practice had helped bolt shut the door to wildness, to awareness, to the master tracker, which is what all of us are in the conscious state.

My self-observation had an ulterior motive: under the guise of seeking the truth about itself, self was really interested in its own development and growth.

Paul Rezendes doesn’t have a lot of material on the internet, which is good as you won’t endlessly distract yourself just reading about him.  Listen to my interview of Paul Rezendes, read The Wild Within, check out his Mindful Tracker videos, then reach out to him at PaulRezendes.com.  To me, he’s the kind of teacher that really shines in personal interaction.

I also enjoy Paul’s connection with, and care for the lessons that wilderness can teach.  You can see a little more about that in the documentary The Inner Tracker, which documents an attempt by Paul and others to expand the potential for what teaching tracker could accomplish in the self and the world.  As an ex-naturalist and environmental educator, I still chafe at our increasing worship of technology and disassociation from the wild world around us, and “the wild within.” Look at the image I was selling to my gang.  It may have been appropriate in a wolf pack, and even at some level of human behavior, but for us to learn what it means to live in harmony with the natural world and each other, we have to go beyond selling images to each other and begin to understand direct communication.