Joseph Sadony is all but forgotten in spiritual circles. His Gates of the Mind 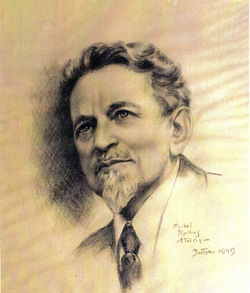 is now decades out of print and his research laboratories fallen to ruin. His focus was on exploring intuition: to discover its source, develop it, and use it for the betterment of mankind. Long before the New Age movement, he advocated the intuitive human as the next step in our evolution and the salvation of our planet.

His book mixes autobiography and thoughts on intuition. It paints a charming turn-of-the-century picture of a man who shunned ordinary education to follow the callings of his intuition and, in so doing, lived an extraordinary life. As he said:

Fervently and deeply I wanted the truth, and I could see that none of the teachers knew the truth; none of the books told the truth. It was nothing but words, and words about words.

Its real value, though, is in Sadony’s musing on intuition. He felt the human being was like a radio and could be tuned to receive a feeling that would stimulate the brain’s imagination to produce a thought.

It requires not the use of some mysterious faculty you do not possess, but rather the suspension of the use of your “intellect” (verbal memory, reason, etc.) until after your feeling of intuition has clothed itself imaginatively. Then harness it by “logic and reason,” by all means, if you can. But you must first learn how to stop thinking at will. You must learn how to “deconcentrate” instead of concentrating. You must make no strenuous “effort.” You can’t “force” it. You can’t “play” with it. You can’t “practice” it. Spontaneity is its most essential characteristic.

You can become a willing servant, however:

The bargain that intuition seems to drive is that it will serve you if you serve it. You must obey your intuition to cultivate it, to develop it, and to retain the use of it. This is a voluntary act. In colloquial language, you have ahunch, and the hunch is an involuntary experience. Whether or not you obey it is up to you. If it is a real hunch, or intuition, you will inevitably regret it if you do not. These experiences will increase in frequency if you obey them, and if you don’t they will cease altogether. . . .

One must recondition the entire system of reflexes that constitute habit, so that neither habit nor sensory stimuli nor the influence or suggestions of environments, thoughts, desires or purposes of other people can interfere with the function or execution of your intuition or your relation between your inner self and that universal “something else.” That must come before all else — “or else,” in the final transaction.

Sadony also address prayer, which he refers to as the very life of intuition:

Those who pray that the flame that envelops their entire house may be extinguished at once have been unbalanced by the shock of being caught unprepared. Prayer will not controvert common sense. Even God cannot help here, for God’s law was obeyed when the house caught fire. Why was it not prevented by the one in charge?
Prayer is a reminder to “tune in,” so that you will take care of the matches and gasoline before they become instruments of a big blaze. Prayer is a comforter. It is a hope restorer. But if a man thinks that God is going to listen to him when he pleads on his knees in prayer to save his life at eighty, after having forgotten Him for seventy-nine years, he is entirely ignorant of the nature and function and purpose of prayer. But if one has been sincere and fair in all his dealings, he has been praying all the time, and his prayers are answered before he knows it. And he is pleased. And so is God.

Sadony’s story is an inspiring one of a man’s quest to live an intuitive life and investigate the source of that intuition. There were many days when I turned to Gates of the Mind as I struggled with the heavy gate of reason within me.

There’s a bit of activity occurring at the Sadony homestead. Visit valleyofthepines.com to see the efforts to preserve Sadony’s legacy, as well as read many of his writings.

I have amassed a small collection of Sadony-related ephemera, including:

If you dig long enough, you can find dirt on almost anyone.  Here is some sensationalist prose from 1908 describing Sadony as a crazed cult leader:

Here are Joseph Sadony’s grandsons walking the property as well as footage of Sadony’s son Art:

And here is Joseph Sadony’s son Art, recounting a few stories of his dad:

Also, if you have any first-hand information about Sadony or photographs, please contact me: sanevins2[at]yahoo.com. I’m also looking for photocopies of the following works: “The Caravel,” and “Bread for the Day.”